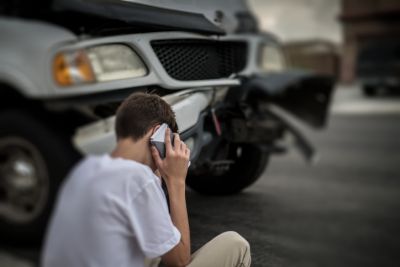 You're driving a friend or family member's car when you are in a crash. You don't have insurance, but the owner of the vehicle does, so you should be covered. But what happens when there was something wrong with the insurance application? Could you end up without no-fault benefits as an innocent injured motorist?

Not everyone owns their own vehicle. Many people, especially those who live and work in Michigan's big cities, don't own a car or carry a no-fault insurance policy. Instead they rely on public transportation, ride-shares, and the vehicles of friends and family members to get where they need to go.

But driving a family member's car can sometimes create another level of stress when an innocent injured motorist tries to make a claim for no-fault benefits after an accident. The Michigan No-Fault Act says even if you don't have insurance, you can receive benefits after a car accident based on the policy covering the vehicle. However, some insurance providers claim that the sins of the father (who owns the insurance policy) can carry over to the son (the innocent injured motorist) when those "sins" relate to misrepresentations made in applying for auto insurance. This debate is the basis for a long-awaited Michigan Supreme Court decision: Bazzi v Sentinel Insurance Company.

Ali Bazzi was driving his mother's car when he was injured in a motor vehicle accident. Ali was an innocent injured motorist, but it turned out his mother, Hala and sister, Mariam, had improperly insured the vehicle using a commercial policy for the family business, Mimo Investment, LLC. When the insurance company learned that the car was not being used for commercial purposes, it argued, and the trial court agreed, that the Bazzis had committed fraud in signing up for the policy.

Hala and Mariam had not been injured, Ali had. So even if the family had committed fraud in creating the policy, the question remained whether Ali, as an innocent injured motorist, could be cut off from benefits because of someone else's actions. The trial court said no. It applied the Innocent Third-Party Rule and said the insurance company could not rescind (take back) the contract because Ali hadn't been party to the improper actions that created it.

Then in 2016, the Court of Appeals weighed in. The judges there said that an earlier case, Titan Insurance Company v Hyten, had done away with the Innocent Third-Party Rule, along with the "Easily-Ascertainable Rule", both of which were designed to protect innocent injured motorists. That decision meant that insurance companies could avoid paying any insurance benefits - even to innocent drivers or passengers - if they were able to show discrepancies in the creation of the insurance policy contract. That fraud meant that the insurance policy was void when it was created, and any claims filed under that policy would be invalid.

In the time since the Court of Appeals decision, many claims for no-fault benefits have been denied based on supposed fraud defenses. Insurance companies have been going over accident claims, and their underlying policies, with a fine-toothed comb, looking for anything that could be the basis of a fraud defense. Anything from undisclosed changes in address to tickets or unreported single car accidents have resulted in long, drawn out court battles. Because of this, personal injury attorneys across Michigan have been waiting for the Michigan Supreme Court to review Bazzi and decide whether the Innocent Third Party Rule would still protect innocent injured motorists.

On July 18, 2018, the Michigan Supreme Court made its decision. A majority of the justices agreed with the Court of Appeals that Titan had eliminated the Innocent Third Party Rule. They said that the Michigan Constitution protects all "common-law" defenses, including fraud, unless they expire on their own or are changed by law. The Michigan No-Fault Act eliminated many common-law defenses, but not fraud. The court said that showed an insurer is able to use a fraud defense to rescind a policy and avoid paying benefits based on it.

But unlike the Court of Appeals, the Michigan Supreme Court said that wasn't the end of the case. An insurer is not entitled to an automatic dismissal when a policy is void because of fraud. This is an "equitable" defense - meaning it is based on fairness. That means when an insurance provider raises fraud as a defense to an innocent injured motorist, the trial court can protect their claim to benefits, at the judge's discretion, if rescinding the policy would be unfair or inequitable. The state Supreme Court said it is up to the trial court to weigh the interests and circumstances in each case and decide whether to allow the insurance company to rescind the policy when it comes to third parties' claims.

The Michigan Supreme Court's decision was not fully for or against either side. It allows insurance providers to raise fraud defenses, even against innocent injured motorists like Ali Bazzi. But it also says courts can protect those innocent third parties' claims, if justice requires it.

For drivers injured behind the wheel of another person's car, the decision means it has never been more important to have a skilled team of experienced personal injury attorneys working on your case. At Sachs Waldman, we know how to protect innocent injured motorists from the insurance companies' fraud defenses. We will help you understand the law, and its effect on your claim for no-fault benefits. If you have been seriously injured in a car accident, contact our Detroit personal injury law office at 1-800-638-6722.