Menu
Home » Can Roadway Debris Cause a Hit… 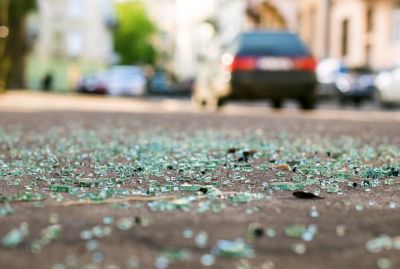 Roadway debris can cause serious trouble. Flying debris can do damage to vehicles and injury to motorists. Even obstructions in the street can cause unpredictable traffic patterns as drivers try to avoid a single-car accident. When serious injuries result, you may find yourself looking for options in Third Party negligence lawsuits and uninsured motorist insurance. But can roadway debris cause a hit-and-run accident?

Any serious injury accident can disrupt your life and leave you scrambling to pay the bills. First party no-fault insurance may cover medical expenses as well as 3 years of lost wages and replacement services, but it is often not enough to cover long-term disability or other non-economic damages. In cases of death, disability, or a serious impairment of body function, most motorists can turn to the at-fault driver for a Third Party negligence lawsuit to recover the differences. But when the injury is caused by roadway debris, that other driver may not even know there was a problem. The question becomes whether items falling off a truck can cause a hit-and-run accident for insurance purposes.

Many Michigan drivers elect to carry uninsured or underinsured motorist insurance (UIM). This is an optional insurance policy in addition to mandatory no-fault coverage. It acts in the place of the at-fault driver to cover Third Party damages that would otherwise go unpaid. Classic cases for UIM claims involve drivers whose cars are illegally uninsured, or whose liability coverage isn't big enough to pay all your damages. However, most UIM policies also apply to hit-and-run accidents, where the at-fault driver is nowhere to be found.

The Michigan No-Fault Act lays out all the benefits and payments an insurance company is responsible for under a mandatory no-fault policy. But when it comes to optional coverage, like an uninsured motorist policy, the devil is in the details of the contract. The terms of any contract are supposed to be read based on the plain language of the agreement. But as one emergency medical technician (EMT) learned recently, that language sometimes works differently than you would expect.

On October 13, 2014, Jeremy Drouillard was working as an EMT when he was seriously injured in an accident involving his ambulance. Drouillard's partner, Angelica Schoenberg, was driving through an intersection when the ambulance suddenly hit something. After the accident, that "something" was discovered to be a large amount of building materials that had fallen from a pickup truck that darted through the intersection just in front of the ambulance. Witnesses said the accident happened mere seconds after the pickup lost its load, and that the materials blocked both lanes and stood almost two feet tall.

Drouillard filed an uninsured motorist claim with his insurance provider, American Alternative Insurance Corporation (AAIC), for damages based on the hit-and-run accident. But AAIC denied the claim based on the language of the UIM policy. The contract said AAIC would pay all amounts a covered individual would be entitled to from the owner of an "uninsured motor vehicle":

"That is a hit-and-run vehicle and neither the driver nor owner can be identified. The vehicle must hit, or cause an object to hit, an 'insured,' a covered 'auto' or a vehicle an 'insured' is 'occupying'. If there is no direct physical contact with the hit-and-run vehicle, the facts of the 'accident' must be corroborated by competent evidence, other than the testimony of any person having a claim under this or any similar insurance as the result of such 'accident'."

Generally speaking, when roadway debris falls from a vehicle it can, in some cases, cause a hit-and-run accident. For example, in Dancey v Travelers Property and Casualty Co, 288 Mich. App. 1 (2010), the Michigan Court of Appeals found that a ladder lying in the roadway would not have been there without a vehicle involved, so it caused a hit-and-run accident. But in Drouillard v American Alt Ins Corp, Docket No. 334977, Docket No. 334977, the Michigan Court of Appeals said that wasn't always the case.

AAIC first said coverage didn't apply because the driver of the hit-and-run vehicle didn't know there had been an accident. The court said there was eyewitness evidence that could allow a jury to determine otherwise:

This was enough to take the matter to the jury, at least on this issue.

"Accordingly, we must conclude that the plain language of the contract provides uninsured motorist coverage to Drouillard only if the unidentified pickup truck caused an object to hit the insured ambulance, and not vice versa."

Because the building materials were stationary, Drouillard's UIM coverage did not apply.

Dancey and Drouillard show that roadway debris can sometimes cause a hit-and-run accident. But UIM coverage for these accidents depend on the specific circumstances of the crash, and the language of the contract itself. In these ambiguous cases, having a skilled auto accident lawyer at your side is essential. At Sachs Waldman, our experienced personal injury attorneys understand the complex law uninsured motorist coverage and Third Party negligence lawsuits. If you have been seriously injured in a hit-and-run accident, we will meet with you and help you recover all the compensation you are entitled to. Contact our Detroit personal injury law office at 1-800-638-6722.