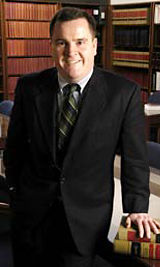 Designated a Michigan SuperLawyer, Brian A. McKenna devotes his practice to representing injury victims and claimants who are being denied the insurance benefits to which they are entitled.

Mr. McKenna is a graduate of Ferris State University (BS, 1989, High Distinction) and the Wayne State University Law School (J.D. 1993). Detroit accident attorney Brian McKenna is a member of the State Bar of Michigan and Illinois and is admitted to practice before the United States Court of Appeals for the Sixth Circuit and the United States District Courts for the Eastern and Western Districts of Michigan.