Distracted Driving Made 2016 Deadly for Drivers 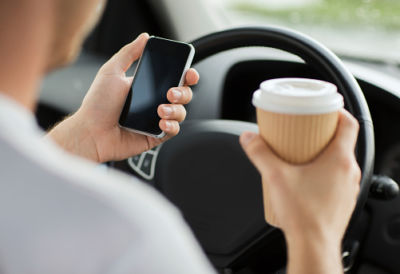 If you think there have been more cars and more accidents on your daily commute over the last year, you may be right. The preliminary numbers are in, and 2016 was the deadliest period for Michigan in years. For many driving safety advocates, the culprit was an increase in distracted driving.

Earlier this year, the Michigan Office of Highway Safety Planning reported that 2016 resulted in 306,779 auto accidents across the state. 78,371 people were injured in car crashes over those 12 months, and there were 1,047 traffic fatalities. That's the first time Michigan traffic deaths hit the 1,000 mark since 2007. These numbers could continue to go up as law enforcement agencies finish their year-end reports.

According to national 2016 traffic fatality statistics, fatal car accidents are on the rise nationwide as well. For the first 9 months of 2016, deadly accidents are up 8%, for a total of 25,875 deaths in the first three quarters of the year. And that was after another 8.3% increase in 2015.

Experts say that a number of factors could have come together to make 2016 the deadliest in years. Ann Readett, spokeswoman for the Michigan Highway Safety Planning office, told the Detroit News:

“We know some things that are certainly playing a role is an improved economy. ... More people working ... gas prices have been fairly low. Those two things along increased travel increase exposure."

The National Highway Traffic Safety Administration (NHTSA) says distracted driving, especially the use of smartphones, could be pushing traffic fatalities up as well. An NHTSA study released last year showed that nationwide, cell-phone related vehicle accidents went from 47,000 in 2010 to 69,000 in 2014.

Not all forms of distracted driving are created equal. Text messaging requires visual, manual, and cognitive attention because you need to read the screen, use your finger or thumb to type, and think about what you are saying. Because it uses all three, it is an especially dangerous form of distracted driving.

Even though most drivers know texting while driving is dangerous, many still place calls, text, and use apps like maps or social media behind the wheel. At any given time, as many as 660,000 motorists are using their phones while driving. In a 2013 poll, almost half of all drivers admitted to answering calls while driving, and a quarter will call out.

Younger drivers, who have less experience responding to unexpected traffic issues, are the most likely to use their phones while driving. 70% of teens admit to using mobile apps behind the wheel. Smartphone ownership is only going up. In 2011, 52% of drivers owned a smartphone. By 2014, that number was up to 80%.

Distracted driving is especially dangerous because it makes it hard, if not impossible, to respond to threats on the road. It takes an average of five seconds to read a text message. At highway speeds, even as low as 55 miles per hour, that is like driving across a football field with your eyes closed. That means when something unexpected happens, you don't see it coming.

In auto accidents, speed matters. The faster the vehicles are moving at the moment of the collision, the harder the impact is on the people inside those vehicles. High speed crashes are more likely to cause fatal injuries. So when a distracted driver doesn't see your taillights or hit the brakes, it means the crash will be more serious and more likely to be fatal.

Do Your Part to Prevent Distracted Driving Crashes

Texting while driving and using a smartphone without a hands-free device are illegal in Michigan. However, laws like this are not enough to stop distracted driving. It takes a commitment by motorists to change their driving habits and drive more safely. The U.S. government has created a pledge to help you make the commitment to drive phone-free. It says:

Distracted driving kills and injures thousands of people each year. I pledge to:

Parents and drivers can also install smartphone apps that lock out notifications and other features to block distractions while you are on the road. Will you take the pledge to protect yourself and your passengers? Avoid distracted driving to help bring the number of fatal accidents back down in years to come.

At Sachs Waldman, we have extensive experience helping the victims of distracted driving accidents recover PIP benefits from no-fault insurance providers and at-fault drivers. We can help you get your expenses covered. Contact our Detroit personal injury law office at 1-800-638-6722.